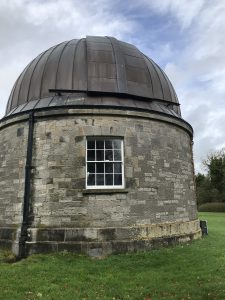 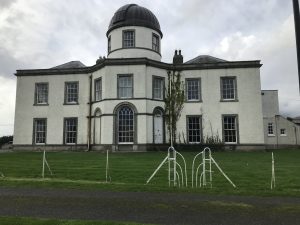 On a very breezy and wet morning some 37 of us went to Dunsink Observatory at the outer edge of the city to be shown around by the Director Prof. Peter Gallagher (DIAS Astrophysics). Peter was formerly from TCD Physics where he now holds an adjunct position in astrophysics.

The observatory is housed in a purpose built Georgian building (1785) located in parkland, overlooking the Tolka valley and Royal Canal, with an outlying dome building holding an optical telescope. We were shown the original architect’s plans for the observatory, which proposed two Palladian wings that were never built. It was commissioned by TCD (Provost Andrews funded it  with a bequest), but in 1947, Trinity handed it over to DIAS. Find more history here.

Needless to say there were long Trinity associations with the observatory with many directors acting as Astronomers Royal. Early work centred on defining Dublin Time – some 29 min behind GMT, simply due to our latitude being ~6° W.

Francis Beaufort (the eponymous figure behind the Beaufort wind-scale) spent some time there. A Force 7 wind was blowing outside while we were there.

The most famous Trinity scientist to hold a position there was William Rowan Hamilton, of Quaternion fame.

DIAS Astrophysics includes approximately 35 researchers based at Fitzwilliam Place in central Dublin and at Dunsink Observatory in west Dublin. DIAS Astrophysics undertakes research on solar and stellar physics, space weather, planetary science, star formation, the interstellar medium, high energy astrophysics, and instrumentation. DIAS has contributed to many European Space Agency (ESA) and NASA projects, including Solar Orbiter and the James Webb Space Telescope, and are actively involved in ground-based facilities such as LOFAR and the European Southern Observatory. They collaborate with researchers at universities and research institutes in Ireland and around the world.

Peter then brought us on a tour of some of the rooms with fascinating exhibits. We saw one of Hamilton’s notebooks recording his struggles with the algebra associated with quarternions. He showed us the various optical telescopes made here in Dublin by the Grubb factory in Observatory Lane in Rathmines.

Peter has plans to connect the observatory to the Royal Canal and Tolka valley greenways, at Ashtown station, via a Hamilton Way. This would allow easy access for family groups from the city and surrounding estates by bicycle or on foot. He wants to organise more events that introduce the public to its work and to generate more interest in STEM subjects.

You will find some images of the outing here.